I can't believe those boys at KFC finally went and did it.

Yes, the Double Down, KFC's new item that sandwiches two strips of bacon and two slices of cheese between two fried chicken "buns," has now been dropped upon the nation, after having made news and become an Internet meme while just being test marketed in Rhode Island. After all the warnings/ridicule, I had hoped for some sense of self-preservation, if not simple human decency, to prevail against this launch. But now here we stand at the gates of hell. Look, I'm usually game for the latest limited edition fast food items, but this is just . . . apocalyptic.

Then again, some reports suggest that the Double Down is not unusually toxic within the realm of fast food, so maybe it's time I learned to stop worrying and love the Colonel Sanders. 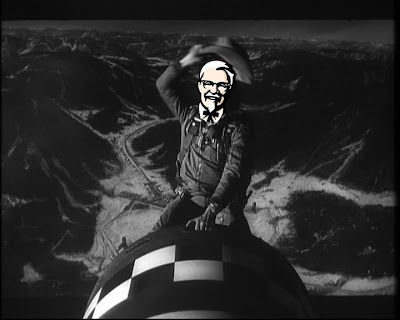 (I actually wanted a picture of the colonel in full regalia riding a Double Down. Then I realized that I can't draw, so I whipped this together instead.)
Posted by Henry at 6:08 PM

I'm eating one of those as soon as possible.

Hey, did you make that picture in Gimp?

Affirmative on the Gimp.