Following the tragic Grave of the Fireflies (1988) and the poignant Only Yesterday (1991), director Isao Takahata gives us . . . a talking, singing animal picture? Indeed, on the surface, Pom Poko (1994) seems the most cartoonish entry in the entire Studio Ghibli library, and perhaps it is. But the story is also surprisingly dark and, at times, outright unsettling.

In mockumentary fashion, Pom Poko follows a community of raccoon dogs or "tanuki" (called simply "raccoons" in the Disney translation) fighting to preserve their habitat in the Tama Hills, which, in the 1960s, is rapidly succumbing to urban development and deforestation. Tanuki are characterized in Japanese folklore as mischievous creatures possessing mystical powers of illusion and shapeshifting. In Pom Poko, it is these powers that the tanuki primarily draw upon to wage their war against encroaching humanity. Mostly, this involves pranking the unwitting humans by staging ghost stories to scare them off the land, basically haunting the area in the manner of a Scooby-Doo villain. Although they make for rather mean tricks to play on the humans, many of the schemes the tanuki devise are hilarious to observe.

Even funnier is an alternative proposal of trying to blend into human society. Masters of transforming, the tanuki are even able to pose as humans, albeit with some strain. We see early on that some less gifted tanuki are comically unable to pull off the human form convincingly. Then, when a team infiltrates the city to research human society, the documentary narrator drily suggests that the dark circles you sometimes see under people's eyes actually indicate undercover tanuki on the verge of reverting due to the exhaustion of having to maintain human form.

For the first half, Pom Poko is by far the funniest movie Ghibli has ever done. Into the second hour, although the movie itself maintains the same playful tone, I no longer found the story a laughing matter. The tanuki succeed in scaring off individual humans, but these victories do little to slow the tide of civilization advancing into their home. The movie repeats a pattern, of the tanuki frightening a group of humans, then celebrating their accomplishment, only to see on the TV news that the land developers are undaunted. After a couple cycles of this, a sense of futility sets in. At that point, well before the closing credits, you realize that the tanuki are never going to be able to win the war, and then watching them continue to fight on hopelessly with the same old tactics becomes simply exhausting, even agonizing, which is maybe the point—I mean, imagine how the tanuki must feel, if even we the viewers are starting to feel worn down. But it also becomes repetitive and tiresome to watch, and I don't really buy that that was Takahata's intention. It starts to seem gratuitous after a while.

The most elaborate sequence in the entire movie involves the tanuki focusing all their collective power to stage a grand parade of spirits through the city streets. The desperate tanuki bet just about everything on this massive operation, but there's not even any message (e.g. "get off our land") accompanying it to the humans. Given that it is a parade, it comes across more fun than scary or threatening, and that's how the humans in the movie end up taking it as well. Do a little research, and you'll find that the spirits featured in this sequence (and elsewhere throughout the movie) are all nods to Japanese folklore and literature. Having this information maybe adds an extra dimension to one's viewing experience, when you realize that, in addition to the environmental message bemoaning the thoughtless advance of urbanization, Takahata is celebrating Japan's folkloric traditions while also lamenting their shrinking place in modern Japanese culture. But obviously none of that resonates with me, and so this just comes across as a very long and self-indulgent sequence that doesn't serve the main "raccoon dog war" narrative in any effective way.

The movie could have used some editing, but, when it works, it is as emotionally affecting as Takahata's previous films. In fact, I honestly think this tops Grave of the Fireflies as Ghibli's most feel-bad movie. Although their powers make them ideal tricksters, tanuki are traditionally held to be jolly by nature, also lazy and absentminded. Pom Poko emphasizes all these traits of theirs to show why they could never effectively wage a war. That only makes it feel all the more wrong as the tanuki fail and die, all the while never losing their playful demeanor. In one especially unsettling scene, a group of tanuki, freshly run over, are depicted in extra-cartoony form—a style used elsewhere in the film usually when the characters are having a silly good time—as they address the camera for their final words: "Well, I guess we're no match for the humans." In the next shot, we're shown the road littered with very realistically drawn dead tanuki bodies. 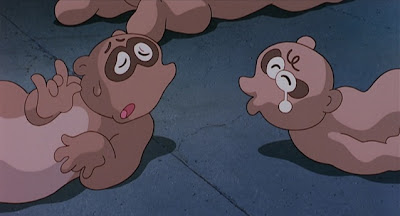 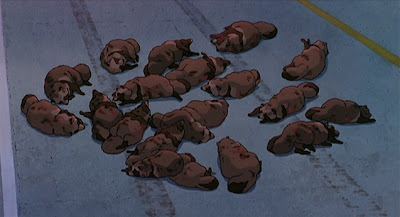 Pom Poko is not subtle, and it's overlong by about twenty minutes in the middle. Even so, no other Ghibli movie ever made me laugh so hard or feel so terrible. And certainly no other ever did both to me in the same movie.
Posted by Henry at 2:42 PM